I have been on a backcountry ski tour with Daniel Arndt to Piz Beverin, Grisons. This mountain is a very nice ski mountain, especially when avalanche risk is low and you can speed down an north-eastern couloir, packed with powder snow…

However, there were loads of snow and we had an avalanche risk of 2-3 (on a scale being 5 the highest) that day. Even at 3 you have to be very careful by chosing which path to go. This year, my latest information says that we have already 12 persons who died in avalanches by now, with an estimated average of 20 / year. With that many snowpack on the rock, you have a good reason to avoid this E-flank, and we did. We took the NE-couloir instead, which was incredible fun as well.

If you view this photo enlarged, you can see some ski tracks in there anyway. 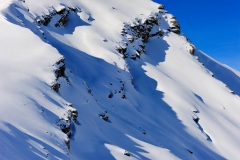